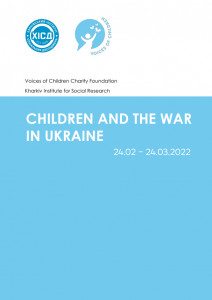 Ukraine has been at war for a month already. Millions of people have become internally displaced persons and refugees in other countries, many of them are children. Even more children are suffering from occupation and active combat in many regions in eastern, southern and northern Ukraine.

The extreme cruelty of the invaders, the constant attacks on civilians and civil infrastructure objects have resulted in significant numbers of victims among both adults and children. Children are forced to live in basements, subway stations, limit themselves to drinking water and food, and do not have access to medical care. Many children have already come under shelling, have been taken hostage by the Russian military, have been seriously injured and even killed. During the first month of the war, 128 children died.

This report aims to outline the key problems and needs of children in different situations of war –  during relocation or evacuation, under occupation, in areas where active combat are taking place, as well as in institutional care facilities.

← Попередній запис How a City Close to the Ukraine-Russia Border Has Been Shaped by War
Наступний запис → Children and war in Ukraine 24.03.-24.04.2022